Mother's Day with Ondine and Sanna

To kick off the first instalment of Tuchuzy Stories, we sat down with Ondine Purinton-Miller and her mother Sanna Purinton for Mother’s Day. Captured in their Sydney home, we had a moving discussion on motherhood, how to “run your own race” and fond childhood memories of dancing to Led Zeppelin. 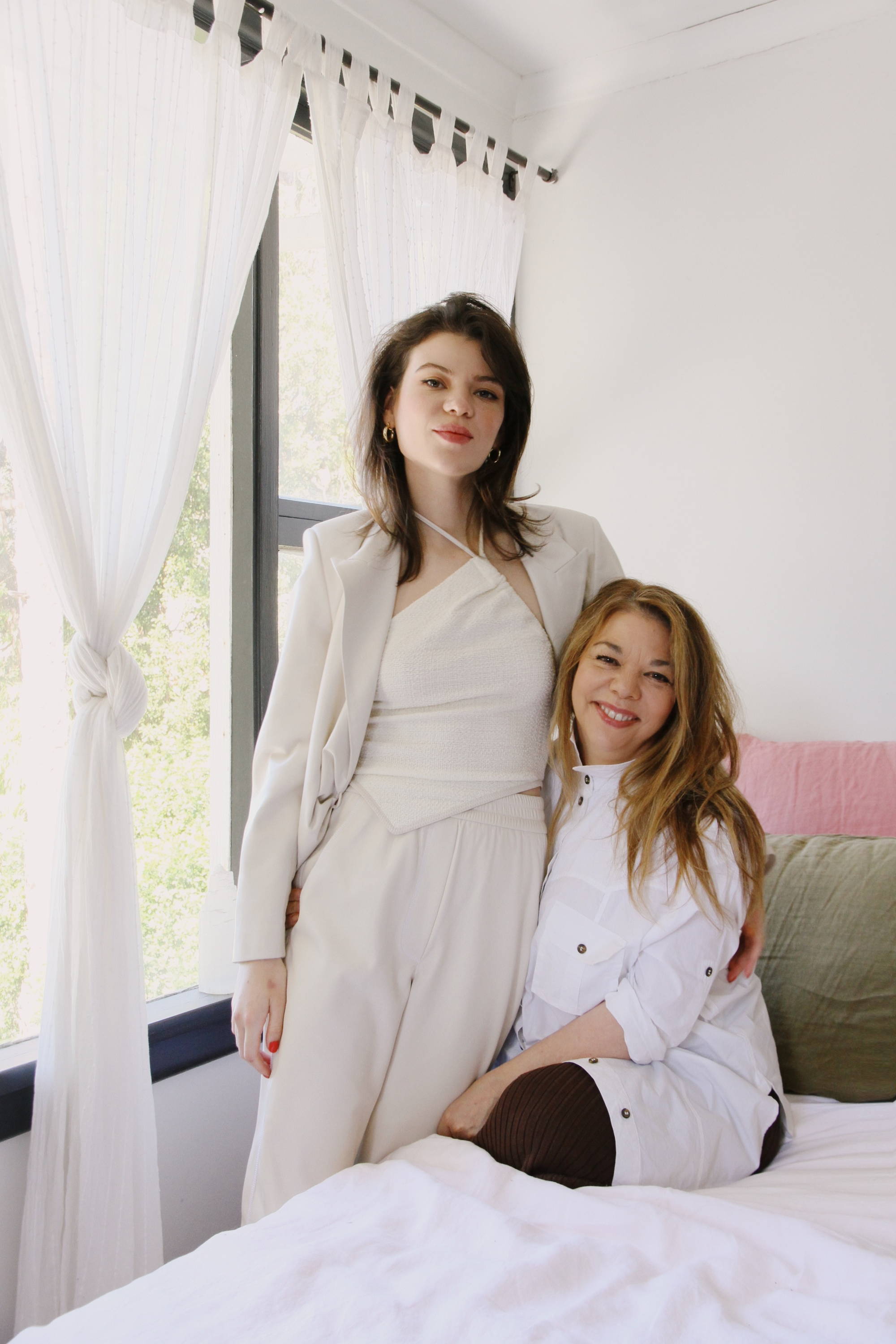 “For me being a mother demands I am accountable, authentic and present.”

HOW DID YOU CHOOSE YOUR CHILDREN'S NAMES?

“For Matisse, I was on a hammock on the water’s edge. Suddenly this name (I had known so well, having been raised in an artist’s family) poured into my consciousness. It was as if I was being told who she wanted to be. I have this tendency to listen to my daughter’s needs even when they were in utero.

She is Matisse named after the painter.

As for Ondine: I was looking for a name that was equal to Matisse who was born 6 years before. Matisse loved ballet as many little girls do and I would take her to the ballet at the opera house so we could have adventures, and perhaps learn about the arts, we had a ballet book with all the classic ballets illustrated within it. ‘Ondine’ is ballet and also the element of water in Alchemy, this name spoke to the girl’s father, to me and Matisse. Instantly we knew this being would be Ondine. When we birthed her at home Matisse offered her the middle name, which is Daisy. Later we were told that Henri Matisse had a muse he painted, during those extraordinary days of the Impressionist movement in Paris, this muse was named Ondine.”

WHAT'S SURPRISED YOU MOST ABOUT BEING A PARENT/MUM?

"How much I liked these awesome ladies. I knew I would love them but I had no idea how much respect I would have for them. I love their honesty, wisdom and humor but I also love how “in” bodies they are...it is cool. These women are so completely themselves, I absolutely like them so much!"

TELL US ABOUT YOU:

"This question always gets me, there’s so much I do and want to do that sometimes I get overwhelmed. I have my own label Alchimiste, which is constantly a WIP. It's in the process of growing, hopefully to include more than just clothes, rather embodying the complexities of all of us women in every aspect. Right now, I work on social media. I started off as a writer, deep down I’m a poet, I have a cookbook brewing in me somewhere, some beauty products, a collection of poems. There’s a lot." 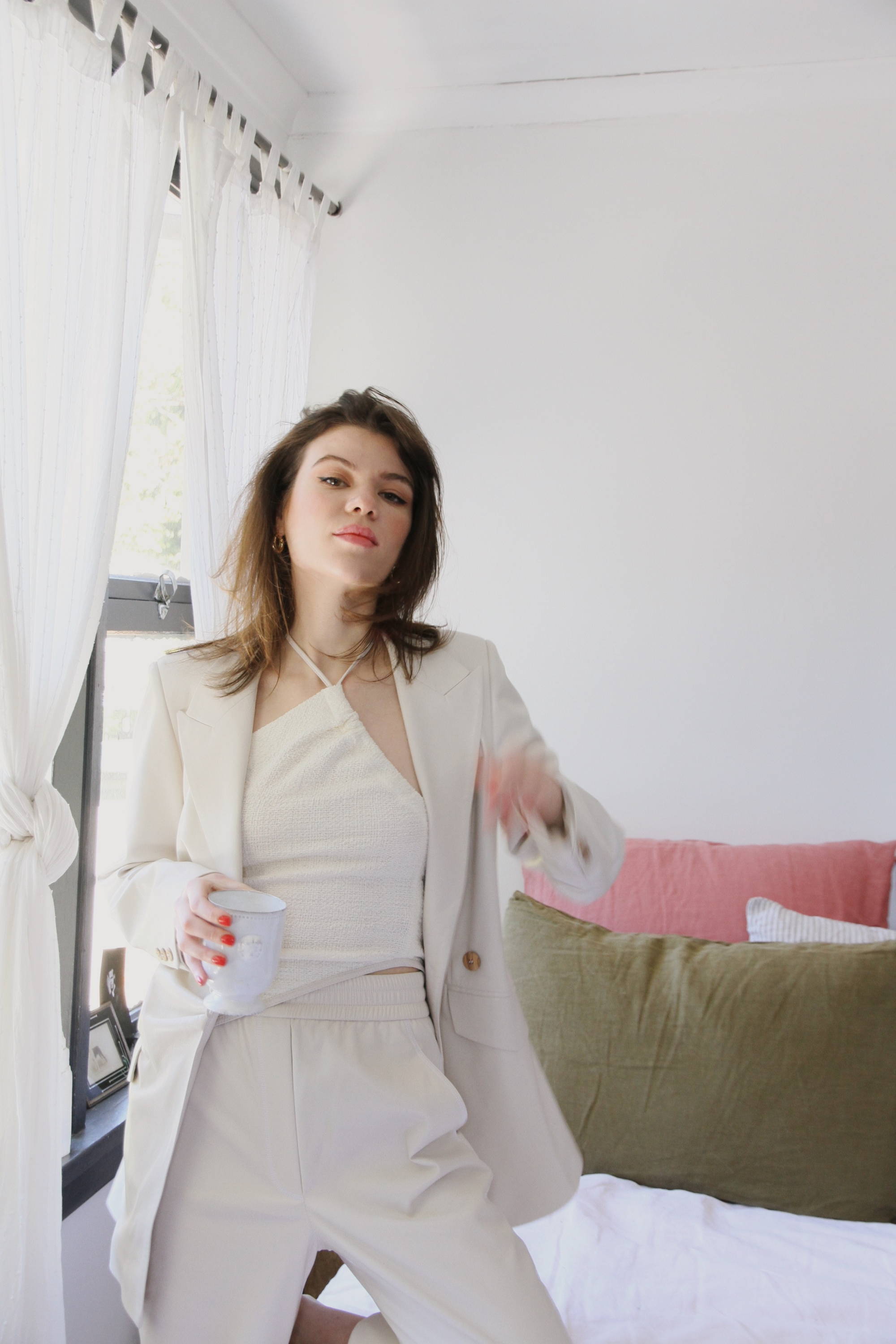 “It’s more than just wisdom, she has this exuberance and effervescence, strength, heart and cheekiness about her that’s unmatched.”

HAS SHE TAUGHT YOU ANY LESSONS THAT HAVE NOW COME INTO FRUITION AS AN ADULT?

"Oh my god, everything?! I kind of wish I could pick one lesson she’s taught me, but my entire existence has been these pearls of wisdom in often hidden ways. Sometimes I don’t realise I’ve been offered this clarity until after the fact. I’m lucky, people pay her for her wisdom and I’ve had it for my entire life. The words “run your own race” has always been something that stood out to me, something that no matter what age you are runs true; you can’t base your existence and your success on someone elses. It’s so easy to compare and I’ve fallen victim to it many times in my life; she told me to march to the beat of a different drummer, find my own path with grace, kindness, joy, laughter and clarity."

WHAT IS ONE CHARACTER TRAIT/QUALITY YOU HAVE INHERITED FROM HER?

"Visually, I have similar cheekbones to her. Definitely not skin colour. Maybe a bit clairvoyant?"

To kick off the first instalment of Tuchuzy Stories, we sat down with Ondine Purinton-Miller and her mother Sanna Purinton for Mother’s Day. Captured in their Sydney home, we had a moving discussion on motherhood, how to “run your own race” and fond childhood memories of dancing to Led Zeppelin.

TELL US ABOUT YOU:

“I am a Spirit Consciousness Facilitator, Clairvoyant and Spirit Life Coach and work with clients locally and internationally to equip them with the tools to go through this world with a foundation of clarity and connection to spirit. Each day, assisting them to return to home to themselves, bringing consciousness to the board room, relationships and the self. This has been my vocation long before I actually knew it, coming from a long lineage of shamanic Chilean women. I feel so honoured to work with people every day.” 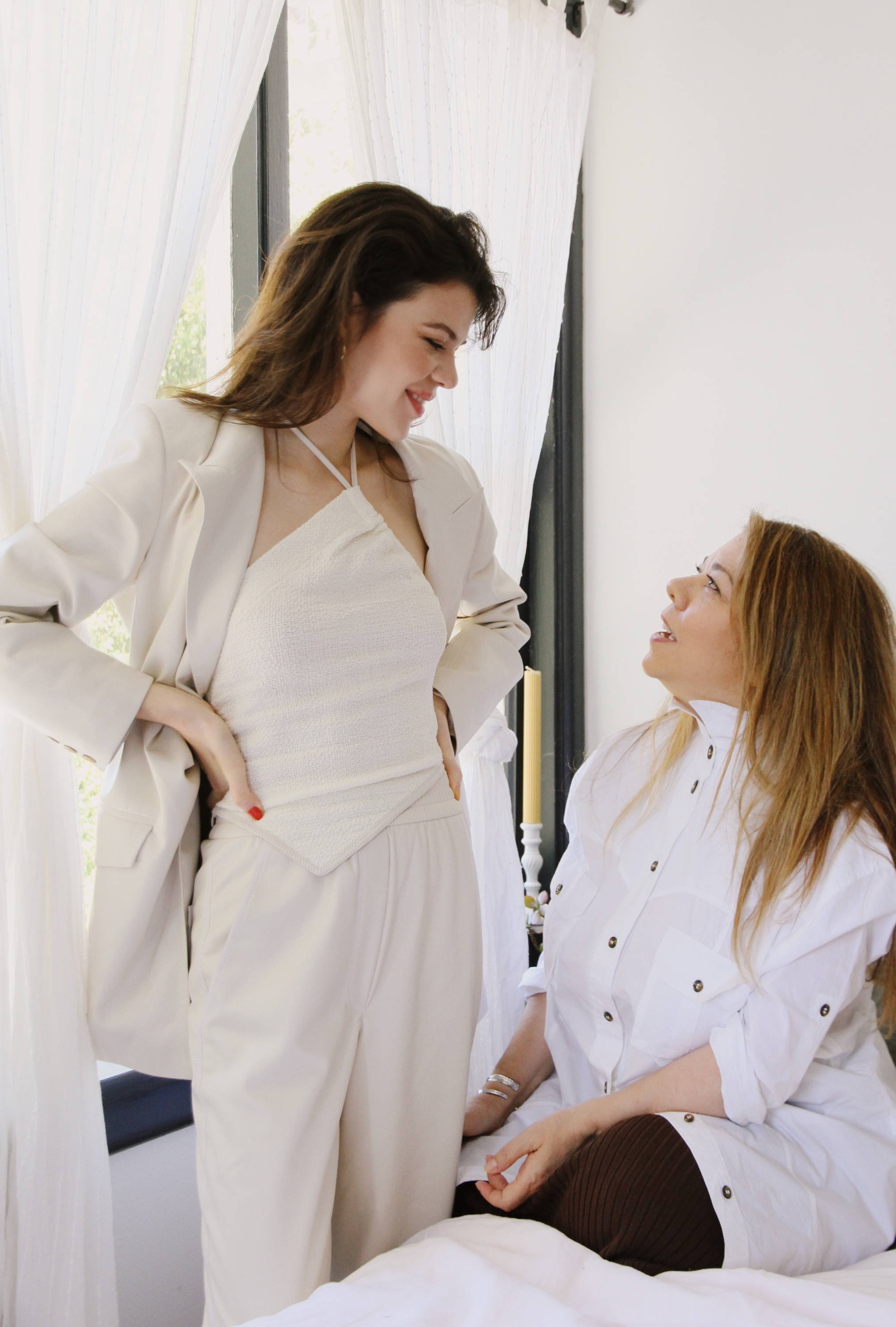 “I had no idea of how a mother surrenders herself in the act of birthing a baby and then daily as she asks for the best for her children. This surrender is not a disempowerment but connection to the power that rumbles all women.”

WHAT IS THE MOST BEAUTIFUL THING ABOUT BEING A MOTHER TO YOUR CHILDREN IN PARTICULAR?

"For me being a mother demands I am accountable, authentic and present. When I am in this place I am undoubtedly in my power. I got to know myself in them.I am the best person I could possibly be as their mother. They make me deepen in love like I never knew was possible before them.I had no idea of how a mother surrenders herself in the act of birthing a baby and then daily as she asks for the best for her children. This surrender is not a disempowerment but connection to the power that rumbles all women."

WHAT IS YOUR FAVOURITE THING ABOUT YOUR MOTHER?

"The word wisdom doesn’t scratch the surface, she has this indescribable way of weaving wisdom, fables, laughter, joy and fun in every experience. We have movie nights together where what will seem like the most random movie is picked and slowly as it unfolds it always is relevant to whatever I’m going through in my life at that very moment on a deeper level. It never feels pious or preachy and sometimes it comes in ways you’d least expect. She’s played songs when I’ve been going through something, so in a way she’s made a soundtrack to my life. Also, she’s side-splittingly funny. It’s more than just wisdom, she has this exuberance and effervescence, strength, heart and cheekiness about her that’s unmatched."

WHAT IS YOUR MOST SPECIAL MEMORY OF YOUR MOTHER FROM YOUR CHILDHOOD?

"Cooking with her every day, the minute I could. That skill and love of food is something I can take into my every day life and know it stems directly from her. Even in 50 years, you’re seasoning your food with more than just herbs and spices, it’s powerful memories and smells that transcend time. We also danced every night after dinner, without fail, listening to everything from led zeppelin, Talking Heads to Kirtan chants and George Harrison." 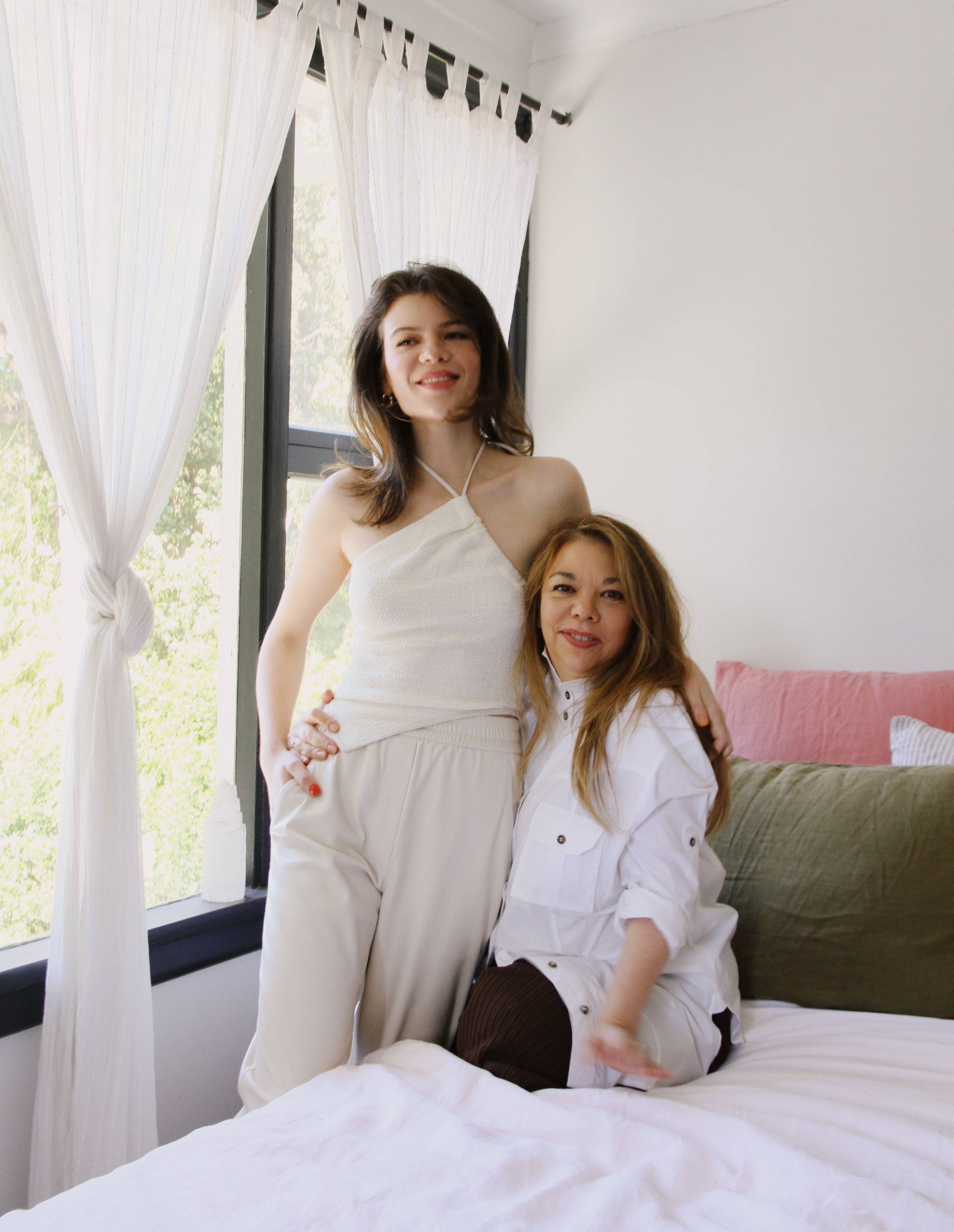 To kick off the first instalment of Tuchuzy Stories, we sat down with Ondine Purinton-Miller and her mother Sanna Purinton for Mother’s Day. Captured in their Sydney home, we had a moving discussion on motherhood, how to “run your own race” and fond childhood memories of dancing to Led Zeppelin. What Inspires You "What I love about fashion is that it’s a form of expression and for me, it’s about using it as a platform to lead from the front and be part of the change that is happening. Sometimes, women forget how powerful our voices can be and I’m... Scattered amongst the luxury, designer labels in-store at Tuchuzy, you will find our eponymous label; Chosen By Tuchuzy. The label was born when our Director, Daria Sakic, found herself constantly on the search for contemporary, flattering cuts that balanced a raw aesthetic. Soft knits, body-moulding cottons and innovative cuts were the result and the well-known niche it has made for itself in the fashion & lifestyle market. Our latest collection stays true to its signature style and is a testament to timeless wardrobe essentials in trans-seasonal colours. Peppered with black, grey marle and white staples alongside new season colours like... New Horizons In Fashion And Business

amy finlayson What Makes Bondi Style So Covetable? From our iconic street style through to timeless transitional pieces to wear now as spring approaches, here local artist, fashion maven and business leader, Amy Finlayson shares what Bondi and being a female leader means in today’s day and age What do you love about Bondi? "There’s just something about Bondi. The community vibe. The stillness and serenity you can find in the ocean, through to the amazing food and fashion. It’s a very special pocket of the world and there’s no where else like it. I’ve travelled the world and lived...

Who is your favourite?

Unfortunately your browser is out of date. We recommend you update it in order to fully experience this website. How about trying one of these instead: